My mother was scarred first by her father’s death and secondly being uprooted from the love of her family. She carried the weight of abandonment throughout her entire life.

There aren’t a lot of details at this point about my mom’s experience at the Asilo. Unfortunately, my mother passed suddenly in November of 2001. While she was alive, she told me about her experiences as well as the difference in the nun’s treatment between the girls who were at the school (asilo) as orphans and those who were children of the elite. My mother also said that because she was placed there as an orphan, she was not supposed to see her mother. She did say that on rare occasions her mother was able to visit, but it was not permitted often.

One glaring incident depicts my mom feeling very ill one morning due to an ear infection. One of the nuns demanded that she continue with her morning chores and slapped her very hard over the infected ear. The blow knocked her unconscious. My mom spent the next year of her life at a hospital where she underwent extensive surgery and lost hearing in that ear. As sad as this is, she actually liked this time of her life because she was loved and cared for by the staff, nurses and doctors at the hospital.

When speaking to her siblings Luis and Esperanza during my visit to Maryland in February 2016, both still felt guilt and extreme pain about Delia being taken away from the family. Obviously, neither had control over the situation. Uncle Luis stated that the poverty level was at such an extreme during this time (early 1940’s) that drastic measures had to be taken. Who knew what was the right thing to do?

This interaction moved me so much. I never knew how my aunt and uncle felt about this. They actually spoke to me about it individually without me asking. It was as if they were waiting to open their hearts to me so they could finally relieve themselves of this intense anguish. I felt perhaps they may have expected me to reprimand them in some way. They were never to blame.

At times life deals some of us a very crappy hand. 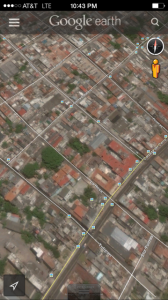