The Cuban Dream Part 1 – The Beginning

These writings are dedicated to the memory of my parents Antonio and Delia Garcia as well as immigrants from all over the world. Many of these stories have never been shared. I am grateful and thankful for their perseverance, bravery, courage and sheer will to make a better life for themselves and their families.

This blog is not of a political nature. It is simply an account of events which have transpired. It is mainly the story of my newest project : filming a documentary in Cuba and writing music along the way with the objective of reconnecting with my heritage. 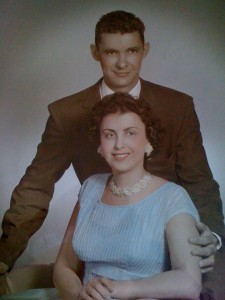 My father Antonio “Ñico” Garcia, an honorably discharged officer of the Cuban Navy, was in his mid twenties when he decided that his life would have to have a drastic change in order to secure a future of any kind. The revolution was starting to rear its head in the mountains of Cuba. This did not smell of prosperity to many of the country’s citizens.

It was approximately 1955. At the time, Ñico was engaged to my mother Delia Hevia. My uncle, Luis (Delia’s brother) had been in and out of the US and had access to work. My father saw the opportunity and took it.

He worked in New York for a short while to save money, then came to Connecticut where there was steady work. Once he was set up with an apartment and a better job, he married his fiance Delia by proxy and brought her to Wallingford, CT in the middle of winter. It was quite a culture shock for a 19 year old Cuban girl. My mother suffered homesickness to a large degree.

My mother Delia Hevia was one of 7 children. Her family was extremely poor and lived in a one room dirt floor home. Her father Manuel was not around much (unfortunately I have learned he came from an affluent family and his addictions to drinking and gambling managed to get him disowned), but Delia adored him. She would tell me that she remembered waiting up for him late at night, sitting on his lap and a sharing his meager dinner.

Delia’s young life took a downward spiral once her father passed away at age 5. Her godmother decided it would be a good idea to place Delia in an asylum for orphans which would lighten the burden on her widowed mom. The school, Asilo San Vicente de Paolo in Havana, could be subject of a documentary all its own. Delia was not allowed to see her family and received little love from the nuns who ran the establishment. I cannot imagine the degree of suffering which this young girl faced. She was there for over 10 years.